Nearly everyone has at least heard the name of Judas Iscariot – if only as an epithet for a traitor, even if unaware of the origin of the term. Judas was an actual man who lived in the first century, who died around 33AD. There is not a lot known about Judas, but we do know some things, and there are speculations about others based on documents and history.

One thing that is a fact is that he was one of the 12 original disciples of Jesus Christ. While we are not told the circumstances of his selection, he is nevertheless named among the apostles and, indeed, was the treasurer for the group. He was one of three men named Judas among the twelve; the other two were Judas Thomas (more commonly known simply as Thomas) and Judas Thaddaeus (also generally referred to by surname only). Judas or his father Simon (or both) likely came from the town of Kerioth in Israel, about fifteen miles south of Hebron. The name “Iscariot” probably comes from the Hebrew “Ishkeriyyoth” or “man of the village of Keriyyoth.” It is also possible that the proper translation is closer to “of the suburbs.” However, some have suggested the name comes from the Latin “sicarius” which means “murderer” or “assassin” and was the root for the name of the group of assassins known as the Sicarii. One problem with this view is that many historians believe the Sicarii were not formed until the 40s or 50s while Judas died in the 30s. Another problem with this view is that his father is named as Simon the Iscariot, as well, suggesting a family or origin name.

“Judas” is the Hebrew name Judah translated into Greek; it means “praised.”

The other apostles were all Galilean, but Judas was not if he was born in Kerioth. While they all lived in the northern area of Galilee, Judas would have been from the southern part of the nation, instead. The thing for which he is most known is the betrayal kiss for 30 silver which pointed out Jesus to the Roman soldiers who were looking for Him to arrest Him. This followed the Last Supper, at which Jesus called him “a devil” and indicated a knowledge of the coming betrayal; however, the other disciples appear to be oblivious, not understanding the implications. As treasurer, Judas seemed to be trusted by most of the disciples. John was the only one who was outspoken about Judas being a thief who was likely to take money from the bag (see John 12:6).

In paintings of the Last Supper, Judas usually either has no halo or has a dark one, contrasting with the other disciples who are portrayed with light halos. This is also true in some stained glass windows, like the one in the Church of St. John the Baptist, Yeovil.

Judas is condemned to the lowest (ninth) circle of Hell in Dante’s Inferno. Dante’s take is that Judas – because he was the ultimate traitor who betrayed the Son of God Himself – is stuck by his head in the jaws of Satan’s central head (of three), purportedly the most vicious, allowing his back to be clawed by the fallen angel.

The kiss of betrayal is immortalized in the art of Caravaggio in The Taking of Christ. The betrayal itself has several different perspectives. Some scholars believe that there was a political motivation. They suggest that Judas may have been attempting to spark a war between the Romans and Jesus, expecting Jesus to take over and begin to reign – giving him a prominent place in the new government as one of Jesus’ inner circle. Two Biblical accounts (Luke and John) declare that “Satan entered in” to Judas at the end of the Last Supper, which may be the cause of his reprehensible betrayal. Regardless which is accurate, the fact remains that Judas made a conscious decision to betray Jesus to the Roman soldiers for minimal remuneration.

A Coptic manuscript dating back to the 2nd century AD has been found that purports to be “The Gospel of Judas.” If its origin is authentic and its translation is correct, it portrays a completely different Judas than is commonly accepted. There is a reference to it in writings by St. Irenaeus around 180AD (condemning it), which would tend to verify its existence, if not its validity. In this document, correspondence between Judas and Jesus would seem to indicate that not only did Judas know and understand Jesus was God, but also that the two conspired to arrange for Judas to turn Jesus over to the Romans. This would seem to make Judas as much a sacrifice for the salvation of the world as Jesus Himself. Since the manuscript is badly decayed and damaged, the correctness of the translations is somewhat in question, and because it is likely that it was written in the second century, there is also doubt as to its trustworthiness. 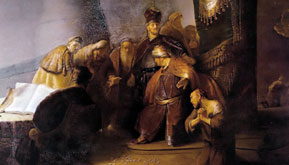 Whatever his motivation or intent, it was apparent that he did not expect Jesus to be condemned to death by crucifixion. When the sentence was handed down, Judas Iscariot repented – he showed intense remorse. He tried to return the money he gained from leading the soldiers to Jesus and proceeded to die a gruesome death.

His death, too, has more than one possibility. The account in Matthew says that he hanged himself, while the account in Acts indicates that he fell and became disemboweled. Whichever happened, it was still an unpleasant way to die. After his death, the body of Judas Iscariot was interred in a cemetery usually used for foreigners, outside Jerusalem, in a field known as “the field of blood.” Either the field or his interment was paid for with the silver he rejected after accepting it for Christ’s betrayal, depending upon which account you are reading.

Today, people use Judas’ name as a derogatory term, to call someone a traitor, or indicate a person who has betrayed in a particularly heinous manner.