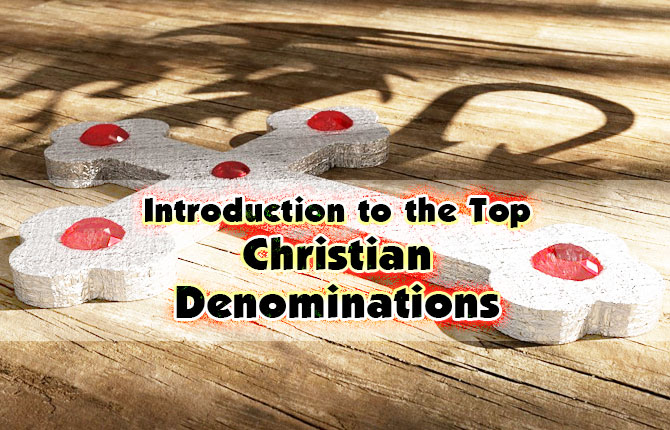 There is an amazing array of denominations among those who claim the appellation “Christian.” There are major divisions and each has many subdivisions, but, broadly speaking, the top denominations tend to be these 19, because of the number of followers who claim their beliefs. The Roman Catholic Church claims to be the oldest church in existence today. Tracing their heritage back to the apostles of Jesus Christ, the Catholics claim St. Peter as their original Pope. Their worship services, known as Mass, are presided over by a priest, who may be assisted by altar servers.

The beliefs of the Catholic church are based on the Nicene Creed, and is particularly characterized by the Sign of the Cross, icons and images, regular fasts (generally of meat), and the seven sacraments that are observed, which are baptism, confirmation, Eucharist, penance, unction (and Last Rites), holy orders, and holy matrimony. The Eastern Catholic Church differs from the Roman Catholic in that they do not hold to celibacy for priests, but ordain married men to the priesthood. While they do follow the Pope as head of the church, they are generally independent. Many of the 23 Eastern Catholic churches began due to groups within churches that had split from Rome deciding that it was best to return. Now united and organized, Eastern Catholic churches are primarily located in Eastern Europe, Eastern Africa, India, and the Middle East. Baptist churches are widely varied, ranging from Southern Baptist, through Missionary Baptist, Regular Baptist, and Free Will Baptist, to Independent Fundamental Baptist. While each has specific differences, generally related to how to receive or maintain salvation, the basic tenets are the same. The name comes from the belief that Baptism should occur after a profession of faith in Christ for salvation, rather than as an infant. Other doctrines held to include: one God in three parts (Father, Son, and Holy Spirit), the virgin birth of Jesus Christ, atonement for sins through Jesus Christ’s death, burial, and resurrection, evangelism of the world through churches, missionaries, and individuals sharing the gospel. One of the Protestant denominations, Lutherans mark their beginning when Martin Luther published his Ninety-Five Theses and departed from the Roman Catholic Church. The basis of Lutheran doctrine is that the Bible is the sole authority on all matters, unlike the Catholic church, which recognizes authority in both Scripture and Tradition. Lutherans do have many liturgical practices that are similar to the Catholic Church, especially the Lord’s Supper (also known as Eucharist). Methodists were inspired by John Wesley’s teachings and life, and Charles Wesley and George Whitefield were also significant leaders. The doctrines that define Methodist beliefs are imparted righteousness after salvation which is assured, and potential perfection in love works as a means of grace, and the supremacy of Scripture over all other sources of divine revelation. Unlike “sola scriptura” – or Scripture only –prima scriptura gives it first place without leaving out all others. Presbyterians belong to one of the Reformed traditions. Their name comes from the form of church government used, in which a presbytery, or representative elders. While many Reformed churches use this same format, the Presbyterians trace their roots to Scotland and England. The primary doctrines emphasize God’s sovereignty and the Scriptures’ authority, and that grace through faith in Christ is necessary for salvation. Reformed, in general, encompasses several denominations. More commonly referred to as Calvinism, the Reformed faith follows the teachings and practices of John Calvin. They differ from Lutherans, who broke off from the Roman Catholic Church around the same time, in that they believe that Christ is actually present in the Eucharist (or Lord’s Supper), and the five points for which they are uniquely known. These are usually represented by the acronym TULIP, which stands for Total depravity, Unconditional election, Limited atonement, Irresistible grace, and Perseverance of the saints. Congregationalists have a Protestant, Reformed background, and differ from the other Reformed churches in that the church government is the congregation. Early Congregationalists were known as Separatists or Independent so they would not get confused with the Presbyterians of the area. Many were established in New England. These churches have historically been known most for their social reform activities, including helping women get access to vote. The defining belief of Anabaptists is that baptism is only valid when the person professes faith in Christ and a desire to be baptized. Known as believer’s baptism, this belief rules out infant baptism, since infants cannot express a belief in Christ nor a desire for baptism. Though they are not the only denomination to practice believer’s baptism, it is their defining belief. The term Anabaptist means “baptizing again,” because those baptized after a profession of faith were often baptized as infants. Those following the denomination today are generally Amish or Mennonite. Deriving the name from the early Pentecost celebration (the Jewish Feast of Weeks), because of the receiving of the Holy Spirit by the apostles, the Pentecostal church places an emphasis on the Holy Spirit and spiritual gifts (such as healing and speaking in tongues). Some Pentecostal churches may use the terms Apostolic or Full Gospel instead of Pentecostal, with reference to their perspective of their churches displaying similar spiritual teachings and power as were seen in the age of the apostles and the early church. The term “foursquare” originated with Pentecostals, referring to their four basic beliefs: salvation through Jesus Christ (John 3:16), baptism of the Holy Spirit (Acts 2:4), bodily healing (James 5:15), and Christ’s coming to take His people (1 Thessalonians 4:16-17). Choosing not to affiliate themselves with an established denomination, nondenominational churches are usually evangelical and there is no standard set for these churches except for that lack of affiliation. They reject a formal denominational structure and maintain the autonomy of each congregation. However, the worship services of these churches tend to lean more toward a Baptist order of service than a Catholic one. Seventh-Day Adventist churches meet on Saturday, rather than Sunday, as following the Sabbath set forth in the Old Testament. Additionally, they place an emphasis on the second coming (advent) of Jesus Christ, which they expect soon. Formally established in 1863, many doctrines in the Seventh-Day Adventist churches are consistent with Protestant Christians – including the infallibility of Scripture and the Trinity. However, its defining doctrines, besides the aforementioned, include the doctrine of investigative judgment (that divine judgment has been in progress since 1844), and the unconscious state of the dead (also known as “soul sleep” or “Christian mortalism”). Originating with the Catholic Apostolic Church, the New Apostolic traces its roots to the mid- to late- 1800s in Europe. The two primary doctrines that define the New Apostolic church are premillennialism (the belief that Jesus Christ will return to earth before the Millennial period described in Revelation begins) and the second coming of Christ. A Catholic – but not Roman Catholic – church, the Eastern Orthodox Church teaches that it is the One, Holy, Catholic and Apostolic Church that was established by Jesus Christ with His apostles. It bases its worship on Tradition passed down from the apostles and the Scriptures. Sometimes this denomination is referred to as “Greek Orthodox” because it developed in the Greek-speaking area of the Roman Empire. Beliefs include the Trinity, the need for salvation (and its ongoing process), Christ’s literal resurrection, the requirement of baptism, and veneration of the saints. The Anglican church is most commonly recognized as the Church of England, which makes sense because the word “Anglican” actually means “English Church.” Led by the Archbishop of Canterbury, the Anglican faith is based on Scripture, Traditions, and the writings of the Church Fathers. Neither fully Catholic or fully Protestant, Anglicanism is an interesting mixture of the two. Their doctrine is primarily expressed in the Book of Common Prayer and is based on Scripture, the sacraments, the catechism, and apostolic succession. While the Thirty-Nine Articles (from the English Reformation, by Henry VIII) played a starring role in the doctrine of the Anglican church, they are now viewed primarily as a historical document that was significant in the shaping of the church. 17. The Church of Jesus Christ of the Latter Day Saints (LDS or Mormonism)

Founded in April 1830 by Joseph Smith in New York, the LDS Church is now headquartered in Salt Lake City, Utah. The doctrines taught are generally the same as commonly held Christian beliefs, including the Trinity, but differs in that it believes in prophetic leadership – the idea that Scripture is still open and not complete, allowing additions as recorded in its Doctrine and Covenants – and the Book of Mormon. Formed in the late 1870s, Jehovah’s Witnesses adopted the name officially in 1931 to make themselves distinctive. The use of the name Jehovah is considered vital for worshipping properly, and they consider hellfire, the Trinity, and the soul’s inherent immortality to be unscriptural. They do not observe holidays that they believe to have pagan roots, such as Christmas, Easter, and birthdays, among others. Most known for their door-to-door efforts, Jehovah’s witnesses believe strongly in evangelizing. Based on the belief that Jesus Christ is the Messiah, Messianic Judaism combines Christianity with Judaism in a unique way. The Scriptures – both Old Testament and New Testament – are the authority, and salvation is by faith in Jesus Christ as Saviour. The distinctive include the belief that Jesus is the Messiah who can save and is God. Jewish laws and customs are followed, but not for salvation. They view Israel as the center of God’s plan.