One of the original twelve apostles chosen directly by Jesus to be in His inner circle, Simon Peter, also called Saint Peter, was a fisherman by trade. Before his travels with Christ, Peter was known as Cephas, an Aramaic word meaning “stone.” Peter, along with James and John, formed the innermost circle of Jesus’ followers, and they were often included in very personal situations, such as Jesus’ prayer in the Garden of Gethsemane.

There are many things about Peter that we know, both from the Bible and from Christian history. We believe that history teaches he was a martyr, who died in Rome during Nero’s reign. He is viewed by the Roman Catholic Church as the first Pope. Simon joined Jesus at the beginning of His earthly ministry. Jesus gave him the Aramaic name Cephas, which translates into Greek as Petros, which is where we get the name Peter. Therefore, when the name Simon Peter appears in the Bible, it is because the writer is using Simon’s birth name along with his name from Jesus. Four of the New Testament books list the twelve disciples, or twelve apostles. Every one of these lists begins with Peter, which suggests he may have been a leader among the disciples, second only to Jesus Himself. His inclusion in the iconic moments of Jesus’ earthly life, such as the Transfiguration, furthers this idea. In fact, Peter, James, and John were the only ones included in such events as praying in Gethsemane and the mount of Transfiguration. This may mean that these three were the most trusted by Christ to fulfill the tasks He requested; however, it may also mean that He knew they needed the most oversight and supervision. Whatever the reason, they were with Jesus more often than the other apostles. Like Peter, Andrew was a fisherman by trade. When Jesus called Andrew to follow Him, the first thing Andrew did was go to find his brother Simon to urge him to come to Jesus, as well. It was at this first meeting that Jesus conferred the new name on him. 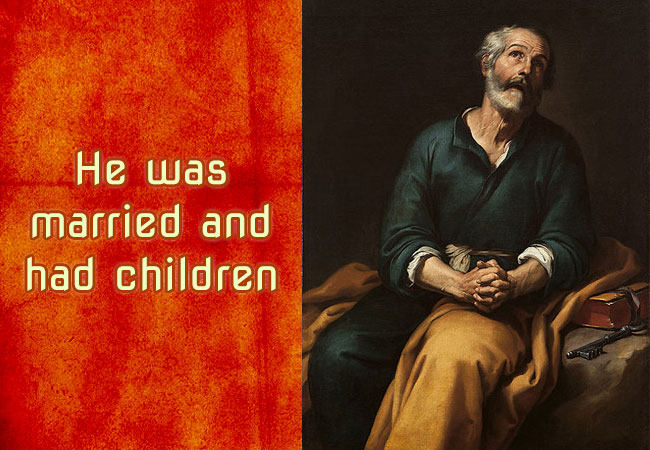 Matthew 8:14 tells us that Jesus went to Peter’s house to heal his mother-in-law, referring to her as his wife’s mother. It is assumed from the fact that he was an elder (see 1 Peter 5:1) that he was a father. While the Bible does not mention anything specific about his offspring, it seems very likely that he had at least one. Simon Peter was the disciple who asked the most questions. When he did not understand what Jesus was doing or what He was teaching, he was not afraid to ask for clarification. This is a good thing for current Christians, as many of his questions, along with Jesus’ answers, show up in the Bible. The Acts of the Apostles, known commonly as the book of Acts, tells about things the disciples did following Christ’s ascension back to Heaven. Peter was one of the primary disciples featured in this narration, probably at least partly because of his assumed position among the apostles. A few of the accounts that feature Peter are the choosing of a new twelfth disciple after Judas Iscariot’s betrayal of Jesus and suicide, preaching on the day of Pentecost in the upper room, traveling with John to the Samaritans to take the Spirit of God, restoring Tabitha to life, and preaching to the Gentiles, who had not previously been sought out for the purpose of giving them the message of Jesus. Jesus told Peter he would be a martyr, in John 21:18-19. He told him how he did as he chose as a young man, but would “stretch forth” his hands, referring to his future death. He was crucified, upside down because he refused to die the same way his Lord had. Peter and Andrew hailed from Bethsaida, a city on the east side of the Jordan River. Another of the apostles, Philip, was also from there. This is a location that Jesus visited several times. Peter and Andrew shared a house in Capernaum, which is a fishing village that borders the northwest shore of the Sea of Galilee. Because they were fishermen, it makes sense that they would have a house in a fishing village, where they could easily fish and sell their catch. As mentioned before, the mount of Transfiguration was one of the scenarios where Peter, James, and John joined Jesus. They went up the mountain together to pray, and while atop the mountain, Jesus’s body began to give off a bright light, and He was flanked by Moses and Elijah. Peter suggested building three tabernacles – one for Jesus, one for Moses, and one for Elijah. He was interrupted by God, from Heaven, Who said that Jesus is His “beloved Son” in Whom He was pleased. This frightened the apostles who bowed into a prone position in fear. Jesus told them not to be afraid, but also not to tell people what they saw until after His resurrection. Peter was one of the disciples in the first chapter of Acts who watched Jesus ascend into Heaven. He was also one of the first to see Christ after His resurrection from the dead, following His crucifixion. Peter preached on the Day of Pentecost, when 3,000 people became believers in Christ in one day. God worked through Peter in miraculous ways. This is not the only occasion on which Peter preached. Some of his other sermons are referenced by Clement of Alexandria – who started out as a pagan but turned to Christ – and the theologian Origen. Along with his sermons, Peter also wrote letters. Two of these were preserved for the edification of future Christians and are in the Bible with the titles 1 Peter and 2 Peter. It is believed that his influence is also seen in the gospel of Mark. Peter was the only disciple to walk on water, like Jesus did. Jesus was walking on the water to the boat where several of the disciples were, in a storm. Peter asked Christ to tell him to come to Him, which Jesus did. Peter stepped out of the boat and began to walk on the water to Jesus. He was distracted by the wind and waves and began to sink, but Jesus reached out to him and told him not to be afraid. They walked together to the boat.