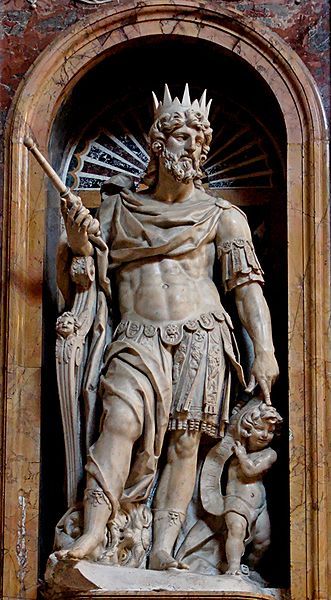 David, based on the Hebrew Bible, is the second king of the United Kingdom of Israel and Judah. He used to be a shepherd-boy who grew into a brave teenager and protected his flock from mountain lions. David is famous for defeating a giant called Goliath even when all of the King’s soldiers were afraid to fight. Let us know more about David and the major events that happened in his life.

Alternate name: A man after God’s own heart – David was known for his devotion to God

When Saul, Israel’s king unlawfully offers a sacrifice and disobeyed a divine instruction to not only kill all of the Amalekites but to destroy their confiscated property as well, God was angered. God then sends the prophet to Samuel, to anoint David, a shepherd and the youngest son of Jesse of Bethlehem, to be the king instead.

God sent an evil spirit to torment Saul. Then Saul’s courtiers recommend to send for David a man that is skillful on the lyre, wise in speech, and brave in battle. David entered Saul’s service as one of the royal armor bearers. He also played the lyre to soothe the king. David became best friends with Saul’s son, Jonathan, and married his sister, Michal.

When the war came between Israel and the Philistines, a giant named Goliath challenged the Israelites to send out a champion to face him on a single combat. David, being sent by his father to bring provisions to his brothers serving in Saul’s army, he stated that he can defeat Goliath. David refused the king’s offer of the royal armor and he was able to kill Goliath using his sling. After defeating Goliath, Saul asked for the name of the young hero’s father.

David was set over Saul’s army and all of Israel loved him. However, his fame caused Saul to fear him, so Saul plots David’s death. But Jonathan, Saul’s son and one of those who loves David, warned him of his father’s plans and David was able to flee.

David had two opportunities to kill Saul but magnanimously spared him. Eventually, Saul met his end at Gilboa with his three sons including Jonathan. After a period of mourning, David went to Hebron where he was chosen as king by the elders of Judah. About 1010 B.C., David was crowned king of all the Israelites.

David also conquered Jerusalem and he made it his capital. Then, he placed the Ark of the Covenant in a tent near his residence, making Jerusalem the religious and the national center of all Israel, preparing the way for Solomon, his son and successor, to erect the Holy Temple there.

David had expanded his kingdom to Phoenicia, the Arabian Desert, the Orontes River, and Etzion Geber. However, internal political troubles overtook David and his son Absalom lead a rebellion which was suppressed when Joab, David’s general, killed him.

The one great wrongdoing David did in his life was when he tried to have Uriah the Hittite, an officer in his army, killed in battle so he could marry his wife Bathsheba. But after being rebuked by Nathan the prophet, David fasted, prayed, and repented.

King David died of old age, leaving behind a legacy as the greatest king Israel ever had, except perhaps for his son, Solomon.

One of the things we can learn from David’s story is to fight for our faith. Because David’s knowledge and intimacy with God was stronger than the perceived reality of the situation. That is the reason why even when all the experienced soldiers of Israel were afraid of Goliath, the strength of David’s faith outweighed the danger he faced.